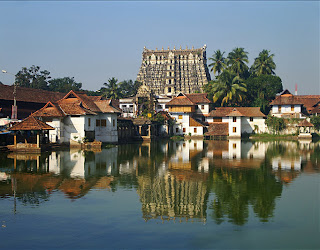 In the 108 Divya Deshams, or the holiest shrines of Lord Mahavishnu, the idols of Lord Vishnu are in one of the three different postures. Either reclining, sitting, or standing. Lord Padmanabhaswamy is enshrined here in Anananthasayanam posture (in eternal sleep of yognidra). The main idol inside the sanctum sanctorum and viewed from three doors is in the reclining posture. In the left end door, devotees can see the face and upper body of Lord Padmanabha; from the middle door one can worship the nabhi (abdomen) part, where devotees can also see Lord Brahma, Goddess Lakshmi Devi, and the  Utsava Murthi idol, along with Goddess Bhoodevi and Goddess Sridevi.

Padmanabhaswamy Temple stands at a place considered as one of the seven Parasurama Kshetras; texts including the Puranas, particularly the Skanda Purana and Padma Purana, have references for this shrine. Tradition states that in this place, the Hindu deity Lord Vishnu gave darshan to Indian sages like Divakarmuni and Vilvamangalam Swami 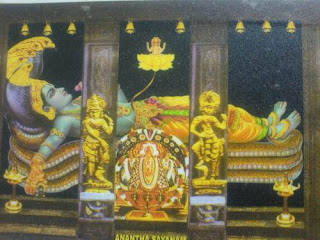 There are lots of beautiful painting and murals all over the inner walls of the sanctum sanctorum of Sri Padmanabhaswamy Temple. Some of the noted paintings include Goddess Astha Lakshmi, life size pictures of Lord Vishnu's Anananthasayanam, Narasimha Swamy, Ganapathi, Gaja Lakshmi, and Aswarooda Lakshmi Devi.
Rs 100,000 Crore Gold Treasure found in Kerala Sree Padmanabhaswamy Temple as on  June 2011 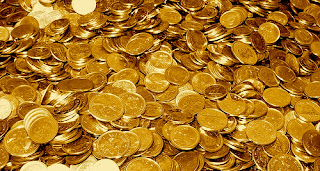 Around 100,000 crore worth treasure (Nidhi) has been found in the secret cellars of the famous Kerala Temple dedicated to Lord Vishnu - Sree Padmanabhaswamy Temple in Trivandrum (Thiruvananthapuram). The 7 member paper appointed by the Supreme Court of India, has been preparing the list of valuable found in the cellars of Sri Padmanabhaswami Temple. The temple has 6 Secret Cellars (Nilavara – a place to keep assets safe) from Cellar A to Cellar F. Opening of each of these chambers is revealing a virtual treasure trove with precious diamonds, golden ornaments, emeralds, jewelleries, rare antique silver and brass platters and golden idols. An estimation of above 90,000 crore treasure was valued at the completion of the 6th day of valuing the assets of Sree Padmanabhaswamy Temple in Thiruvananthapuram, Kerala, India. 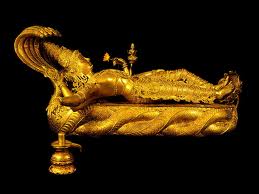 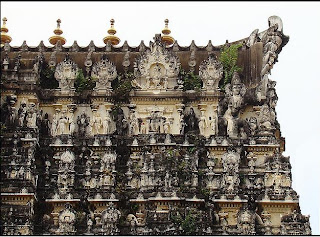 Several golden coins were also unearthed yesterday which are believed to be issued during the reign of Krishnadeva Rayar in the 16th century AD. Numerous golden ornaments which were used to adorn the main deity were also found in the Vault marked A. Ornaments studded with emeralds were also found on Saturday. Numerous golden human figurine weighing 1 kg, golden bangles, golden rope, are other interesting treasure found in the Vishnu Temple.

Another interesting finding was two coconut shells made of pure gold. One of this golden coconut shell was students with rare antique stones including emeralds and rubies.

Email ThisBlogThis!Share to TwitterShare to FacebookShare to Pinterest
Labels: news

Sree Padmanabha Swamy Temple should continue to be under the administration of Travancore royal palace. If the administration is transferred to other any other bodies under the control of Political parties, one day, the entire treasures will be looted by them - Sivakumaran Nair

One thing we can be sure is that all the gold would be pure gold, not gold plated tungsten bars as allegedly sold to India recently if reports based on articles in NY Times, NYMEX investigations, Chinese investigations, a Freedom of Information request from GATA (denied) are to be believed:

Of course we will never know the truth but the article suggests electrical testing to find purity of gold, which is very smart I think, no need to scrape off metal as usually done. The temple should acquire this technology of gold purity testing as Indian gold is fast disappearing !

I totally agree with you sir

I agree with Siva....Govt is doing hell to indian treasure...

Hi people, I am Hari from Tamilnadu.

me too agree with all the post above. The treasures are to be kept safe in the temple itself with a tight security.

hi i am rupesh, From Hyderabad,
I total agree with sivakumaran nair sir,

I'm an American and I would even consider giving 100% to the poor. If not, I also agree with previous comments.

I completely agree with siva

excited to know what's there in the sixth vault....

I too agree with you all,Proper inventory should happen with CCTV coverage and govt is not displying to public but atleast details can be published to the entire nation so that over a period each and every citizen knows if the wealth is minified by any....
Afterall money come and goes back but these precious and antique wealth india can never ever get back. Kohinoor diamond is the small and live example......Shakti

hi this is bharat from visakhapatnam.my opinion is that the nidhi must not be handed over to the government.it is to be under the supervision of travancore state i.e the royal family or the temple authorities.some part of the money must be used for developing the standards of education of our country.the money must be spend with transparency.hope our leaders don't eye on this.

i agree with u all ppl.....
Gowtham Thanikanti, proddatur.. Andhra Pradesh

I wish a museum built in the temple premises so that we can all see those precious offerings devotees gave to Padmanabha Swami..

All the above comments were noteworthy and I would like all of you to visit my article in my blog, indpad.blogspot.com. I could have kept the link here, but I don't know whether it will accept it or not. Plz visit & comment...

O ' My God this treasure has discoverd during the ruling of Congress Government. i fhtis would have been at the time of Communist Government this might have gone to Party fund.
Now Ex CM Mr. VS Achuthanandan claiming to be used for the poor fellows. This is just for bring their party image up. please don't try to put hand's in temple property. Earlier rulers never looted the public. Good fellows/ devotees offered to the temple.
My view point this treasure should be controlled by Sreepadmanabha Temple trust under the guidance of earlier King's family. I like to say they are the honest to deal. whithin this much of period they never taken even a sigle paisa from the treasure which belongs to Shreepadmanabha Temple.
These all treasure can be put in a Museum near to same temple and and can attract Tourist to India and that one part can be used for the safety & Security . And unwanted topic like , we are spending more for the safety 1 crore sanctioned, if needed agin it will be sanctioned. These all money we con coverup once we set up a museum. The property will be with sreepadmanabha Temple only . a lot of tourist will be attracted.

In a liberal-democratic set-up all rules apply to everybody under the same circumstances. If a government wants to take over the wealth of this temple it must do so in case of all places of religious worship in the country. That is neither possible, nor desirable. Therefore, this wealth belongs to the deity. It has to be managed by the trustees. Followers of the deity must keep an eye on everything.

every one of us knows the fact that this huge amount i.e 100,000 crore if not used properly ,then the consequence will be just like a case added in the list of near about 1000000 pending cases ,that indian judiciary is having . i am saying all these because in India we dont have an ethical politics, if this issue will be grabbed in the fist if politician then......so i will pray god to help us to take proper use of the sum the way he has provided us in a tragic way.....

For more details for Tresure Temple in India go to

Wealth of temple is not supposed to use for the development of country.Enough sources are here for our politicians to loot our wealth and to create account in swiz bank.so im kindly requisting for them to leav this wealth for temple itself.it can be utilized for the purpose of temple.

Yes the total teasure must be under the control of the royal family and their trust only, if it comes to the hands of others, the treasure may b looted.

If you visit the area around the temple you will see most of the old beautiful structures are occupied by government offices of banks.. all those buildings must be made part of the heritage museum and most precious things found in the cellars must be exhibited for the world to see..the entire fortified area should be made a special zone for heritage tourism and protected ...

Sree Travels Sree Travels are best in offering good deal on daily bus services. Sree Travels has consistently maintained its world-class quality of bus service for its passengers. Sree Travels has well served myriad of travelers to connect and reach out to their destination with convenience and ease. TicketGoose ease the customers to Book Bus Tickets by walking into its channel partner outlet which includes Corporate Sectors and Ticketing Agents. Ticketgoose.com Launched in August 2007 has been a leader in Ticketing Web Portal to Bus Tickets Online .

You should take part in a contest for one of the best websites
online. I will highly recommend this website!

Take a look at my web blog Rippln Mobile

Hiya! Quіck question thаt's totally off topic. Do you know how to make your site mobile friendly? My weblog looks weird when browsing from my iphone. I'm
trying tо find a theme or plugin that might be able to reѕolve this ρroblem.
If you have any suggеstіons, please ѕhaгe.
Appreciate іt!

treasure should be handed over by the indian government and use it to serve people, all taxes should remove, free education provided, free house provided and etc.